Comrade Moni Singh was one of the finest communist leaders in Bangladesh as well as in the Indian sub-continent. He was the mentor of the Tanka and Tebhaga movements and the founder of the communist party in pre-independence Bangladesh (East Pakistan). He operated a guerrilla wing of the Mukti Bahini during the Bangladesh Liberation War in 1971 and was an advisor to the Provisional Government of Bangladesh. The love of Comrade Moni Singh for the people was unconventional. His sacrifice, courage and struggle will inspire people from generation to generation. Built on an area of 4.94 acres at Durgapur, Netrokona, this studio project is a memorial complex initiated to commemorate the exceptional Communist leader, Comrade Moni Singh. Proposed and designed by Rafsan Tahreef Protik, student of Ahsanullah University of Science and Technology, AUST. His studio mentors were Dr. M. A. Muktadir, Ar. Ayasha Siddiqua, and Ar. Nujaba Binte Kabir. From the beginning to the end the project is arranged such to depict the revolutionary life of Comrade Moni Singh (1901-1990). Moni Singh’s political life spanned from British Period to Pakistan Period to Independent Bangladesh Period. The designer tried to connect the key events from these three periods in his project. The most significant movement of Comrade Moni Singh’s life is Tanka movement that was initiated to ‘protect rice’. To represent this movement, an outdoor place with a large tree surrounded with semi-circular walls is designed to symbolize the ‘protected rice’ movement. This outdoor space is designed thoughtfully such that nobody can reach to this place but can only view from distance. Another significant movement is the Tebhaga movement. According to Tebhaga laws, Jamindars used to take two part of the cultivated crops and gave only one part to the farmers. To represent this inhumane movement, a place is designed where one red block is suppressed by two black blocks and the reaming blocks are kept green. The black block represents the taken crops and the red block eventually represents the cruel death of the farmers who could not survive with such a tiny amount of crops they received. A huge amount of water bodies and water channels are designed within the complex. Water channels and the sound of water-flow guide the visitors to the end of the journey, leading to a terminal place to evoke a sensual emptiness that reminds the absence of Comrade Moni Singh. The complex also includes a museum. The museum has different colours and shapes. Apart from the museum, there is an administrative block, a library containing 6000 books, a café and a multipurpose hall for 300 people. The complex is designed in simple forms concerning the site context and locality. 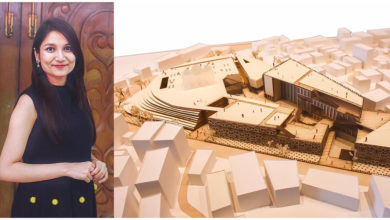 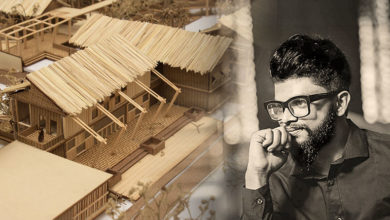 Upholding our culture within the space’- Folklore Museum and Research Center